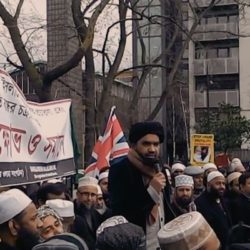 Mufti Shah Sadruddin, a senior Muslim scholar and a leading religious figure on the Council of Muslim Scholars in the UK, has been captured on tape saying that people who insult Islam should be put to death.

His shocking comments, made in 2013, were uncovered by a new ITV documentary, “Exposure: Islam’s Non-Believers“.

The film shows footage of Sadruddin criticizing atheists at a rally in London, which was held in the wake of the murder of Bangladeshi blogger Ahmed Rajib Haider who had made jokes about Islamic beliefs.

Sadruddin said: “He is a bastard, a traitor and a shameless person. Child of a hypocrite, he swore at my Prophet.”

“Wake up! No son of a bastard will remain alive after swearing at my Prophet!”

Astonishingly, his hate speech was filmed just a year before he tried to become a Conservative councillor.

In the run-up to the election he appeared to modify his stance, saying: “I believe in equality, I believe in fairness, I believe in loving the human race and I hate to hate anybody.”