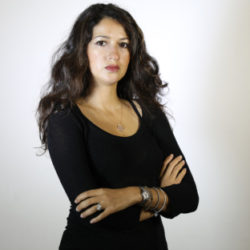 Zineb El Rhazoui, the Charlie Hebdo journalist who happened to be in Casablanca on January 7 last year, the day terrorists “avenging the Prophet” massacred nine people at the satirical magazine in Paris, believes she has a duty to defy Islamists desperate to silence her.

Detruire Le Fascisme Islamique (Destroy Islamic Fascism), being released in France this week, takes the battle of ideas directly to the ideologically-driven zealots who inspired the assassins of her dear friend Charb (Stephane Charbonnier), late editor of Charlie Hebdo who preferred “to die standing than to live on my knees.”

Obtained exclusively by Women in the World, the book dedicated to “Muslim atheists” is an unapologetic strike against the strict application of Islam by imitating the first Salafists or “pious ancestors.” The Prophet Mohammed and his companions, whose violent exploits are contained in “bellicose texts from a barbaric 7th-century Bedouin tribal context,” exhibited codes of behavior El Rhazoui insists have no place in the modern world and can be directly connected to terrorism. “The most abject crimes of Islamic State are but a 21st-century remake of what the first Muslims accomplished under the guidance of the Prophet,” she writes, noting that sexual and domestic slavery, the massacre of non-Muslims (notably Jews), pedophilia, pillage, polygamy and summary executions were all adopted from pre-Islamic societies. The book is also the journalist’s way of carrying on the legacy of her dead comrades, who reveled in their right to mock established religion and fanatics everywhere — with Islam no exception to their traditional French anti-clerical ridicule — through satire and caricature.

Formerly the magazine’s religion writer, El Rhazoui is in the throes of joining the exodus of staff breaking from the magazine under its new management. Flush with cash from international donations, the fundamentally altered publication, she disappointedly explained, “will probably never again draw the Prophet” out of fear of more reprisals.

“[And] those who think that only a handful of madmen are capable of killing for a cartoon of Mohammed forget that everywhere that Islam reigns as the religion of the state, caricatures and cartoons in the press are repressed”.

Religion of peace and love?

“We need to admit that Islamism today is applied Islam,” El Rhazoui — who describes herself as an “atheist of Muslim culture” –writes, responding to politicians, religious figures, Islamophobia opponents and media commentators who claim after every jihadist attack that “real Islam” has nothing to do with such terror.

British Muslim Warns: ‘Those Who Insult Islam Must Die’ In Shocking Undercover Footage
Muslims ‘have the RIGHT to use Sharia law in Britain’, says Islamic activist