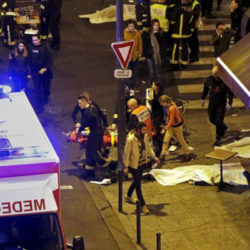 Seven of the nine ISIS jihadis who launched a series of coordinated terrorist attacks in Paris last November entered Europe by posing as refugees.

The attackers were part of a group of 14 who plotted their way into Western Europe by riding the wave of the migrant crisis last year, according to Hungarian security officials.

By using fake Syrian passports, many of the attackers, already on European terror watch-lists, were able to slip back into Europe undetected, along with thousands of other refugees.

One hundred and thirty people were killed in November when a group of gunmen and suicide bombers launched a wave of attacks across Paris, targeting the Bataclan concert hall, the Stade De France and several restaurants and bars. Three hundred sixty-eight people were also injured in the attacks, almost 100 of them seriously.

Some of the remaining terrorists in the group participated in the Brussels attacks earlier this year in three coordinated suicide bombings at Brussels Airport and at Maalbeek metro station killed 32 people.

Read more at The Foreign Desk