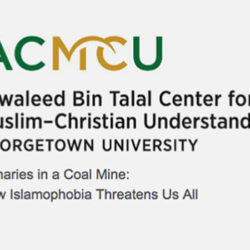 If Islamization ever comes to America—and it may come quickly depending on the outcome of the November election—certain Catholic individuals and institutions will bear a heavy burden of responsibility.

I’m thinking in particular of Georgetown University and its Alwaleed bin Talal Center for Muslim-Christian Understanding (ACMCU). ACMCU’s Bridge Initiative released a report in September on “American Catholic views of Islam, and the way Islam is discussed in Catholic publications.” The report, “Danger & Dialogue,” is particularly concerned that the way Islam is presented in Catholic media is unduly influenced by Catholic “Islamophobes” who are connected to the “Islamophobia industry.”

Now let’s get this straight. During the same month that the report was released, one Islamic terrorist planted two bombs in Manhattan and several in New Jersey, another stabbed ten people in a mall in Minnesota, and a third shot five people in a mall in Washington State. Meanwhile, thousands of Christians and other minorities are being slaughtered or sold into slavery by Islamists in the Middle East and Africa. And yet the folks at Georgetown are worried about “Islamophobia?”

It’s as though, during the rise of Nazism, a center at a major university published a report on the dangers of anti-Nazi sentiment. If you lived in those times, you would wonder what their priorities were. If you found out that the university center received most of its funding from Nazi Party headquarters in Berlin, you would have your answer.

What’s the name of the Georgetown center again? Ah, yes. It’s the Prince Alwaleed bin Talal Center. But wait! Am I suggesting that the type of “research” that comes out of ACMCU is heavily influenced by its Saudi benefactor? And if I am, wouldn’t that be “Islamophobic”? Well, yes, it would, because in the safe-space cocoon occupied by the “experts” at Georgetown, any criticism of Islam—whether rational or irrational—is “Islamophobic.” For the Islamophiliacs, the only way you can prove you’re not an “Islamophobe” is to praise Islam to the skies—as the people at ACMCU continually do.

If you’ve ever wondered why Islamic fundamentalism underwent a resurgence in the last third of the twentieth century, a large part of the answer is Saudi money. The Saudi princes used their oil revenues to build fundamentalist mosques and madrassas all over the world and to staff them with Arab clerics. Thus, the revival of the seventh-century, made-in-Mecca brand of Islam was the result of a well-planned and long-term Saudi indoctrination campaign.

If you think of the Georgetown center as just another Saudi-funded madrassa—albeit a bit higher-class than most—then its obsessive focus on “Islamophobia” begins to make sense. The Center’s primary mission is not to produce objective scholarship, but to serve as an apologist for Islam.

At a time when Catholics and other Christians are being viciously persecuted in the Muslim world, one would think that a Catholic institution might focus its energy on researching the Islamic animus toward Christians instead of pretending it’s the other way around. That animus is not confined to ISIS or Boko Haram. It’s significantly more widespread. Currently, a Christian boy in Pakistan is in jail and faces the death penalty for “insulting Islam.” Meanwhile, 150 Pakistani clerics are demanding the execution of Asia Bibi, a Christian woman also accused of blasphemy. And in Saudi Arabia, 27 Lebanese Christians were arrested and deported for conducting Christian prayers in a private residence.