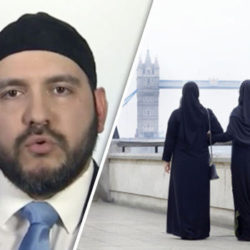 AN ISLAMIC activist has claimed that Muslims have the right to use Sharia law and branded the Government’s inquiry into the matter as an “interference”.

Dr Ahmad al-Dubayan, chairman of the UK Board of Sharia Councils – a body set up to standardise the administration of Islamic law – said unregulated Sharia law courts exist “everywhere in the country”.

He told the Home Affairs Select Committee, on Tuesday, that the self-appointed courts are performing marriages and handing out divorces.

Although the unregulated bodies have no legal force or jurisdiction in the UK, they are regularly used by Muslim families to adjudicate on personal matters, the Committee heard.

Many courts reportedly charge for their services, with fees for divorce proceedings often higher than British courts.

The doctor warned that the exact number of Sharia courts operating across Britain is unknown.

He said: “We don’t know how many councils there are.

He added that he could think of only two or three cases which had been unfair to women out of “hundreds” handled by Sharia councils.