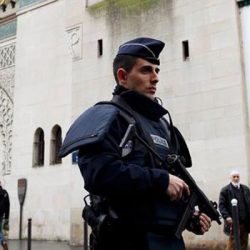 In the wake of the November 13 Paris terrorist attacks that claimed more than 130 lives, the French government is ordering up to 160 mosques to be shut down in the coming months. Raids have revealed large stashes of weapons and ammunition.

The government’s emergency powers grant it the right to take this extraordinary measure, and mosques that are unlicensed or have a history of “preaching hatred” are being singled out.

One of France’s chief imams, Hassan El Alaoui, said last Wednesday, “According to official figures and our discussions with the interior ministry, between 100 and 160 more mosques will be closed because they are run illegally without proper licenses, they preach hatred, or use takfiri speech.” Takfiri speech involves sectarian slurs leveled by one Muslim against fellow Muslims.

“This kind of speech shouldn’t even be allowed in Islamic countries, let alone secure countries like France,” El Alaoui said.

Meanwhile, several of these mosques have been raided, revealing a “staggering” number of weapons and ammunition. Sunday, authorities conducted a raid on a mosque in Lagny-sur-Marne, 18 miles east of Paris, and uncovered 334 weapons and a large quantity of 7.62mm Kalashnikov ammunition, along with ISIS propaganda videos.

Police also turned up recordings of chants “glorifying the martyrs of jihad linked to the terrorist organization Jabhat al-Nusra,” the Syrian branch of Al-Qaeda. The chants were found among teaching materials for youth in a madrassa, or private religious school for boys, connected to the mosque. According to the prefecture of police, “No request was made to open a private school.”