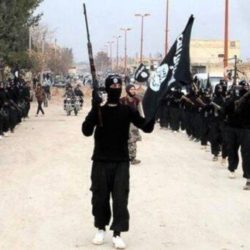 ISIS responds to Pope Francis that the Islamic State is in a war against the infidels approved by Allah.Translated from FDESouche, Via Vlad Tepes:

The Islamic State has publicly responded to statements by Pope Francis that the war waged by the Islamic terrorists is not religious in nature. The article answers the pontiff that their only motivation is religious and approved by Allah in the Qur’an.

Highlights of the latest issue of Dabiq – the official propaganda magazine of the Islamic State – the terrorist group is criticizing especially the naivety of Pope Francis, who’s clinging to the belief that Muslims want peace and peaceful coexistence and that Islamic terror is motivated for economic reasons. In the article “By the Sword” ( “By the Sword”), the authors categorically state: “This is a divinely-sanctioned war between the Muslim nation and the infidel nations.” […]

“Kill the unbelievers wherever you find them”

The article laments that despite the clearly religious nature of their attacks, “many people in the ‘crusaders’ country’ (Western countries)” expressed shock and even disgust because the leadership of the Islamic State ” uses religion to justify violence … Indeed, jihad – the spread of the rule of Allah with the sword – is an obligation that we find in the Qur’an, the word of our Lord, “ says the magazine. “‘Pour the blood of unbelievers’” is a common obligation. The command is very clear: kill the unbelievers, as Allah says, “kill the disbelievers wherever you find them.” “[…]

The fact is that “even if you (the West) stopped bombing us, throwing us in jail, torturing us, to humiliating and driving you us out of our land, we would continue to hate you, because the main raison of our hatred will not disappear as long as you have not embraced Islam. Even if you had to pay the jizyah [tax for infidels] and live under the authority of Islam in humiliation, we would continue to hate you. ” […]