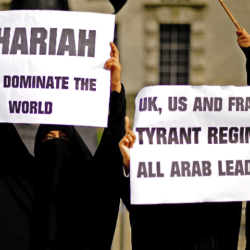 “Sharia is a totalitarian ideology, and we don’t put up with those,” declared Jim Hanson of the Center for Security Policy, appearing on Friday’s edition of Breitbart News Daily to discuss the Nice terror attack.

Hanson pointed to a paper released by the Center for Security Policy last week, entitled Stop Importing Jihadists: A Policy Prescription. Part of that prescription was “a shariaexclusion ban for entry into the United States,” an idea similar to Newt Gingrich’s proposal for a sharia test.

“Existing immigration law allows us to ban adherents to totalitarian ideologies,” he pointed out. “We don’t even need to change the law. We just need to enforce it against what is not a religion, what is a governmental, and cultural, and life-crushing oppressive ideology. So let’s do it. Gingrich was right, Trump’s right, that we shouldn’t let people in from jihadist-controlled areas. And all of these things will be about the only thing that’s going to make us safer in the long run.”