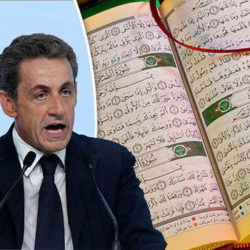 Former head of state, Nicolas Sarkozy has said France will never accept Sharia and that any radical Muslims should be “kicked out”.

An opinion poll carried out by the Montaigne Institute, a liberal think tank, revealed that 29 per cent of Muslims living in France were hardline – known as “ultras” in France – who believe the country should respect Islamic law.

Sharia is widely considered as unsecular and flying in the face of the country’s liberal values.

Responding to this “troubling” poll during a radio interview with Europe 1 today Mr Sarkozy, said that the “zealous” Muslim community – the 29 per cent – should be deported from France, or be forced to assimilate – not just integrate – into French society.

He said: “The Montaigne Institute’s poll is extremely troubling. It proves that a quarter of young Muslims are being seduced by radical ideology.  The truth is this, simply integrating radical youngsters into France’s Republican society has not worked, it will never work. They must assimilate into French society and culture.”

Cardinal Burke on Islam: “I don’t believe it’s true that we’re all worshiping the same God”
“Christian Girls are only Meant for One Thing, the Pleasure of Muslim Men”