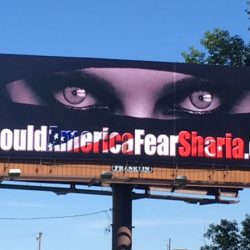 A billboard of a woman in a niqab went up on I-94 in Rogers at the beginning of June, prompting calls to the sign company from the public.  Copy was added to the billboard in July, which now reads “Should America Fear Sharia?”

The billboard is sponsored by the Center for Security Policy, a Washington, D.C. based national security think tank. The site shouldamericafearsharia.org consists mostly of links to videos discussing different topics about Islam and Islamic extremism. The home page urges visitors to sign a petition to ban Sharia Law in the United States. The petition has gathered only 22 signatures as of July 9th.

The billboard was contracted out by the Center with Franklin Outdoor Advertising, a billboard company in Minnesota and Wisconsin.

“The billboard went up the beginning of June,” Franklin salesperson Chris Barta said, “Last Friday we switched it out and put up the one with the website.”

In the wake of the Pulse nightclub shooting in Orlando, the Center’s executive vice president Jim Hanson called the attack, “completely in keeping with totalitarian Islamic code called Shariah.”

Franklin Outdoor Advertising received a number of calls from the public regarding the billboard according to Barta, mostly in June when there was no text accompanying the image on the sign.