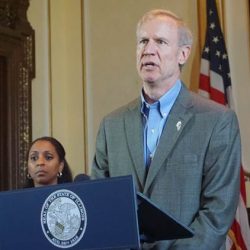 At the end of an especially bloody month of Ramadan, which included theworst terror attack in America since 9/11, some politicians and lawmakers feel the solution is to give Muslim community more of a voice in government.  The state government of Illinois currently has legislation pending the approval of Governor Bruce Rauner that would give Illinois a permanent 21 member Muslim-American Advisory Council.  The Chicago Tribune describes the uniqueness of the measure by saying, “…Illinois could become the first state with a law on the books that gives Muslims a formal voice in government.” The council would have the following structure:

The 21-member council, whose volunteer members would be appointed by the governor as well as leaders in the House and Senate, would advise the governor and General Assembly on issues affecting Muslim Americans and immigrants, including relations between Illinois and Muslim-majority countries. Through monthly meetings and two public hearings per year, members also would serve as liaisons between state agencies and communities across Illinois.

The act specifies that members would serve two-year terms and should bring expertise in a variety of areas including higher education, business, international trade, law, immigration and health care. Staff from certain state agencies would serve as ex-officio members.

This special status for a religious group is surprising in a country that bars an official state religion.  In the legislation it states, “Muslims are the third largest religious group in the State of Illinois after Roman Catholics and independent Evangelical Christians.”  Yet there are no special advisory councils for those other religious groups.

It would be plausible for there to be.  Christians in the U.S. are often targeted by hostile activist groups like the Human Rights Campaign, which seeks to infringe upon their religious liberties.  Indeed, Christians are one of the most persecuted groups worldwide.  Open Doors estimates that each month 322 Christians are murdered for their faith, 214 churches and properties are ruined, and 772 types of violence occur against Christians.  Why wouldn’t Illinois require a Christian council?