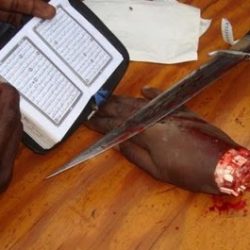 Sharia law is the law of Islam. The Sharia (also spelled Shariah or Shari’a) law is cast from the actions and words of Muhammad, which are called “Sunnah,” and the Quran, which he dictated. Sharia law itself cannot be altered but the interpretation of Sharia law, called “figh,” by imams is given some latitude (see Hitler and Islam).