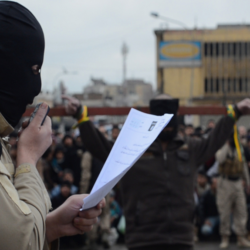 This is how Sharia Law treats dissenters (from Iraqi News):

A well placed source in Mosul informed on Wednesday that ISIS members have executed a number of youths of the city by slicing them with chainsaws.

Sharing details the source said, “ISIS fighters have executed nine youths of Mosul. The outfit accused that these youths belonged to an anti-ISIS resistance faction”.

“The death sentence pronounced by ISIS sharia court stated that the men should be tied to an iron pole in the center of Tal Afar Square in Mosul and then sliced into two with an electric chainsaw,” further added the source seeking anonymity.

So What Exactly Is ‘Sharia Law’?
Are Islamic Schools Radicalizing Children?