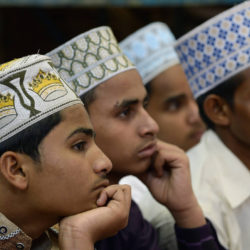 Its happening in France and elsewhere around the globe (from The Stream):

French police raided an Islamic school allegedly indoctrinating as many as 20 children with radical jihadi doctrine, said the French Ministry of the Interior Wednesday.

The school, known as “The Little Bees School,” was found to be operating illegally in the Al-Islah mosque in the town of Villiers-sur-Marne. Approximately four teachers taught 15 to 20 students aged six to 12. The ministry claimed in a press statement that the children were “at risk of indoctrination.” Prosecutors added that they felt the children were in danger of “being turned into jihadist recruits.” Police arrested three men, including the mosque’s imam.

The raid was conducted as part of the government’s “determination to fight radical Islamism … by every means possible within the law,” said the ministry statement.

It is believed that 12 convicted jihadis have attended Al-Islah mosque. The raid on the school was prompted by a previous investigation into the mosque’s radical ties. Town officials said the raid was carried out with the cooperation of the mosque’s leadership.

France has been subject to three major terrorist attacks since the beginning of 2015, which has kept the country in a state of emergency since last November. French President Francois Hollande vowed to destroy terrorism in France shortly after a shooting conducted by the Islamic State left 130 dead.