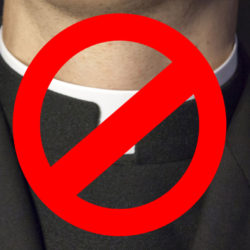 Vicars have been told not to wear dog collars (aka Roman collar) in public over fears that Islamic State will target a British church in its next attack.

One man of the cloth said he has been advised not to wear his dog collar out and about amid fears he could be singled out in a terror attack.

It has also been suggested UK church congregations should have a ‘bouncer’ on the door so that worshippers at small parish churches are more protected.

National Churchwatch has warned smaller churches are at more risk than larger ones and issued new guidance following the murder of a French priest last month.

The vicar, who did not want to be named, told the Daily Mirror: ‘I’ve been told not to wear my dog collar in public to identify myself.

‘I’ve also been told not to be alone in the church but it would cost too much to pay someone to come with me to open up each day.’

The draft 12-page document by National Churchwatch says that churches need to make sure doors can be bolted and that worshippers are aware of what to do in the event they spot anything suspicious, the Daily Telegraph reported.

Read more at the Daily Mirror