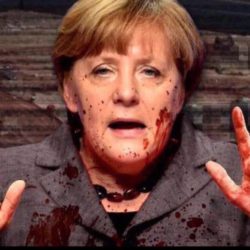 This was the fourth violent attack in Germany in the past week. Ansbach is home to a whole lot of American families whose US Army soldiers are stationed at Ansbach, Katterbach, Oberreichenbach, et al. The jihad bomber’s backpack was filled with explosives. One dead and dozens injured.

2500 were attending the music festival the Muslim terrorist had originally targeted. Fortunately, the jihadi was stopped at the entrance.

Bavarian Interior Minister Herrmann said the Ansbach bomber pledged allegiance to ISIS leader al-Baghdadi in a video found on his phone. If Obama succeeds with his Muslim immigration plot, we can expect the same bloodshed and murder here.

And what’s the enemedia headline? SUNDAY TIMES – Germany warns of anti-migrant backlash after week of bloodshed.

Yes, that’s the problem. Not the carnage, the opposition to jihad terror.

Top Muslim Ally of Pope Francis Reaffirms that Muslim Converts to Christianity Should be Killed
Islamist Knifemen Forces Priest, 84, To Kneel And Filmed His Death As They Slit His Throat