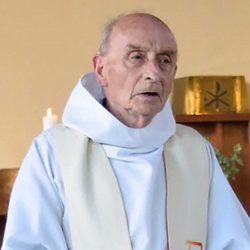 The ISIS knifemen who stormed into a church in Normandy filmed themselves butchering an elderly priest after forcing him to kneel – before they performed a ‘sermon in Arabic’ at the altar, a terrified witness has revealed today.

The 84-year-old priest, named as Jacques Hamel, had his throat cut in a Normandy church this morning in an attack that also left a nun critically injured and both jihadis dead.

The two killers, who shouted ‘Allahu Akbar’ were shot dead by police marksmen as they emerged from the building, which was later searched for bombs.

French president Francois Hollande, who visited the scene today, said the country is ‘at war’ with ISIS after the terror group claimed responsibility for the brutal attack.

One of the extremists who stormed into the church in Saint-Etienne-du-Rouvray near Rouen during mass was a French 19-year-old, who was being monitored by electronic tag after twice attempting to join fanatics in Syria. Unbelievably, his bail terms allowed him to be unsupervised between 8.30am and 12.30pm – the attack happened between 9am and 11am.

This afternoon it emerged that the murdered clergyman was deputising while the regular parish priest was on holiday. French authorities say they have arrested a third man in connection with the attack after a raid at a nearby house.

It was also revealed that the Catholic church was on a terrorist ‘hit list’ found in the apartment of a suspected ISIS extremist last April.

Former French President Nicolas Sarkozy called for a ‘merciless’ response to the killing while ‘horrified’ ex-Prime Minister Jean-Pierre Raffarin said he feared ‘everything is being done to trigger a war of religions’.

One Response to Islamist Knifemen Forces Priest, 84, To Kneel And Filmed His Death As They Slit His Throat