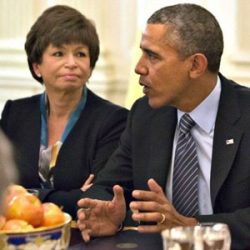 Founder and President of theCenter for Security PolicyFrank Gaffney told Breitbart News Sunday’s Stephen K. Bannon that the U.S. government refuses to acknowledge the jihad threat facing America because it is “living under sharia” law.

“It is important for our government to understand this [jihad/sharia] is the animating force behind the threat we’re facing…around the world and here at home as well,” he declared. “And unless and until we can say that and we can understand it and we can operationalize our response to it, these guys will continue to kill us and all of the Middle East will succeed in destroying our country,” Gaffney said.

His comments came in response to the President Barack Obama’s White House refusing to connect radical Islamic terrorism to the Jan. 12 mass shooting by Omar Mateen, 29, at a gay nightclub in Orlando, FL, that left at least 50 people dead and 53 others wounded. Mateen  is a U.S. citizen of Afghan descent who pledged allegiance to the Islamic State (ISIS/ISIL), which has claimed responsibility for the attack.

There is “a kind of blindness that has been dominating American policy in regard to jihad and what entails it, well, since before 9/11,” he continued.

Gaffney noted that jihad is a mainstream tenet of Islam that is considered sharia (strict Islamic law) by the Muslims who subscribe to it.

By sharia, “they mean it is the path that is supposed to govern all aspects of a Muslim’s life and…they are believing it is God’s will that they will impose it on the rest of us,” explained the Center for Security Policy founder.

Sharia mandates the death penalty for homosexuality, according to experts. The deadly Orlando incident has been described by authorities as the deadliest mass shooting in the United States and the nation’s worst terror attack since 9/11.

What Exactly Is Sharia (Law) and What Does It Command?
Homeland Security Report Calls for Rejecting Terms ‘Jihad’ and ’Sharia’