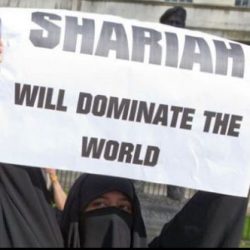 Because of the rise of Islamic influence in Europe and the United States, we have become aware of “sharia courts” and the imposition of Islamic values upon non-Islamic communities. I was curious about what exactly is “sharia law,” what it means, and what it commands regarding jihad, apostasy, laws for non-Muslims, and women.

The word is derived from the Arabic language and basically means “path” or “way.” It appears in the Quran in Surah 45:18: “And now We have set you on the right path. Follow it, and do not yield to the desires of ignorant men. . .” (The root word for “sharia” being translated into “path” in this verse.)

Sharia is believed by Muslims to be the divinely ordained legal system of Islam. It governs every aspect of life: politics, economics, hygiene, marriage and family relationships, diet, warfare, crime. Everything is covered.

Unlike the Christian belief about the Old Testament Law of Moses being limited in time, Muslims by and large believe that Sharia is the law to be carried out today. (I will deal with the New Testament view of the Law of Moses in forthcoming articles.) Sharia has been compiled over the centuries from direct sayings in the Quran as well as from the Hadith (traditions about Muhammed’s life).

There are four Sunni schools of Islamic law. I am currently reading an English translation of one of those schools. The book is Reliance of the Traveller by noted Islamic scholar Ahmed ibn Naqib al-Misri (translated by Nuh Ha Mim Keller and published in 1999).

In the introduction, the author states, “The four Sunni schools of Islamic law, Hanafi, Maliki, Shafi’i, and Hanbali, are identical in approximately 75 percent of their conclusions. … The present volume [The Reliance of the Traveller] represents one of the finest and most reliable short works in Shafi’i jurisprudence.”

Next Page: What does Sharia teach about Jihad? It isn’t always against non-believers…

What does Sharia teach about jihad? Well, in the section entitled “Jihad” on page 599 it says:

Jihad means to war against non-Muslims, and is etymologically derived from the word “mujahada,” signifying warfare to establish the religion. And it is the lesser jihad. As for the greater jihad, it is spiritual warfare against the lower self (nafs), which is why the Prophet … said as he was returning from jihad, ‘We have returned from the lesser jihad to the greater jihad.’
The scriptural basis for jihad, prior to scholarly consensus is such Koranic verses as: (1) ‘Fighting is prescribed for you’ (Koran 2: 216); (2) ‘Slay them wherever you find them’ (Koran 4:89); (3) ‘Fight the idolaters utterly’ (Koran 9:36); and such hadiths as the one related by Bukhari and Muslim that the Prophet … said:

“I have been commanded to fight people until they testify that there is no god but Allah and that Muhammed is the Messenger of Allah, and perform the prayer, and pay zakat. If they say it, they have saved their blood and possessions from me, except for the rights of Islam over them. And their final reckoning is with Allah.”

And the hadith reported by Muslim, “To go forth in the morning or evening to fight in the path of Allah is better than the whole world and everything in it.”

Next Page: What does Islamic law say about religious freedom? Hint: It isn’t pretty…