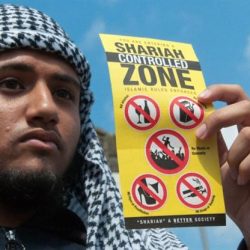 A number of bars in Denmark are reporting daily harassment by migrant sharia patrols who claim the streets they operate on are “sharia zones”, vandalise businesses, and even shout abuse at government ministers in the streets.

The reports of violence and intimidation are coming out of Nørrebro, a suburb of the Danish capital Copenhagen, where the local trade association is considering employing “peace guards” to protect business and punters. Local bar and nightclub owners have reported having their windows smashed, customers attacked, and even death threats being made against them by “immigrant origin” Sharia patrols because they serve alcohol.

Speaking out against the abuse, café owner Heidi Dyrnesli said of one recent attack: “Some men came into the bar and shouted that all guests had to leave. They said the area belonged to them and that Nørrebro is now subject to sharia and drinking alcohol is forbidden.”

Businesses have been told they have to pay money to the migrant gangs in return for protection in addition to the alcohol bans, and failure to comply has led to death threats. One local speaking to Norwegian newspaper Nettavisen named as Mohammed Ahmed  said some 60,000 kroner (£6,300) had been demanded of him and his business.

Mr. Ahmed said the immigrant gangs were deliberately creating disruption so they could extract protection money. He said the gang had once kicked down the door and threatened to “flay me alive”, and that he lived in fear of the day they carried out their threats.

The Sweet Face of Islam
What Exactly Is Sharia (Law) and What Does It Command?