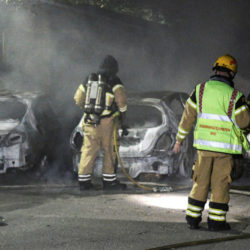 For years European authorities have denied any problem with Muslim immigration, but now crisis is exploding and is getting worse, with the number of so called “no-go” areas in Sweden rising, says Ingrid Carlqvist, editor-in-chief of Swedish newspaper Dispatch International.

A recent report suggests Swedish police are failing to control the country’s suburbs following the creation of as many as 55 so-called ‘no-go zones’. The police have reportedly been verbally attacked when trouble flares in the areas. A number of incidents have involved officers being pelted with stones. Vandalism, drug crime, and sexual assaults are also reported.

The Swedish public is on edge after a gunman who injured at least four people in the city of Malmo remains at large.

RT: All the risks are listed on a leaflet issued by Hungary. The pamphlet claims hundreds of completely lawless ‘no-go zones’ exist in Europe especially in Sweden. However, the Swedish embassy in Hungary has dismissed Budapest’s claims – saying no such areas exist. Do you think these leaflets are an exaggeration?

Ingrid Carlqvist: No, it’s not. This is just semantics. The Swedish authorities don’t want to call them ‘no-go zones.’ They think that ‘no -go zones’ is place where no one can enter. But that is not what normal people mean. They mean that the ambulances can’t go there without police escort. When the police come there, they will get stoned and people will try to set fire to police cars and so on. They are lawless areas – and that is what people call ‘no-go zones’. No normal person would ever go inside there.

RT:You’re basically saying that Hungary’s claims are correct? Is it a real reflection of Europe now?

IC: Not all of Europe. But what we see here is that people in these areas, the people who live there, who are mostly Muslims are actually saying this. When Swedish journalists go in there, they just tell them to “f*** off,” because this is not Sweden. They are trying to impose Sharia law in these areas and they are doing a good job about it. The police could do things: they could go in there and just stop all of it when they set fire to the cars and when they throw stones, they could do something. But the longer they wait, the more impossible this job will be of course, because now we have at least 55 of these zones in Sweden.

RT: And what about Sweden, as media claim there are up to 55 so-called ‘no-go zones’ in the suburbs. How accurate is this information, given Stockholm has denied it?

IC: It’s accurate, because it is the truth. The Swedish authorities and the European authorities for so many years have been claiming that there is no problem with Muslim immigration; that they will become just like us in one generation or so, and we will have no problems with it. So they have been denying the problem for so many years and now it is exploding, because there are so many of them and it becomes worse by the day. We have this police force – three police officers quit their jobs every day. Most of them are trying to find other jobs, because the job is horrible: they don’t get paid enough; they are in danger, and the head of police won’t let them do their jobs. If they don’t do something very forceful right now, you will actually have big parts of Sweden where the police cannot control the law anymore. You have to do it now, today.

“Christian Girls are only Meant for One Thing, the Pleasure of Muslim Men”
France’s Sharia Police