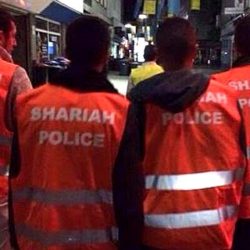 In France, no organized Islamist brigades patrol the streets (as in Germany or Britain) to fight alcohol consumption or to beat women for the way they are dressed. Yet gangs of “youths”, again, both men and women, are increasingly doing just that in practice. For years now, “big brothers” have been obliging their mothers and sisters to wear a veil when they go out. And now that this job is done, they have begun to fight non-Muslim women who wear shorts and skirts — no longer just in the sensitive Muslim enclaves, the “no-go zones” of the suburbs, where women no longer dare to wear skirts — but now also in the heart of big cities.

More and more, the equivalent of “Islamist Virtue Police” try to impose those standards by violence. As Celine Pina, former regional councilor of Île-de-France, said in Le Figaro:

“In the last recorded attack [on the families in Toulon], with cries of “whores” and “strip naked”, the young men were behaving as a “virtue police” that we had thought impossible here in our parts…

“It cannot be expressed more clearly: it is a command to modesty as a social norm and self-censorship as a behavioral norm… [it]… illustrates the rejection of the female body, seen as inherently impure and dirty…

“The question of the burkini, the proliferation of full veils, assaults against women in shorts and the beating of their companions, share the same logic. Making body of the woman a social and political issue, a marker of the progress of an ideology within society.”

Laurent Bouvet, a professor of political science, noticed on his Facebook page that after the men were beaten in Toulon, so-called human rights organizations — supposedly “professionals” of “anti-racism” — remained silent in the debate.

The prosecutor of #Toulon said: “the fight was trigger by a women’s dress code. These women were not wearing shorts… Sexism is undeniable. Where are the professionals of public indignation?”

Laurence Rossignol, Minister for Women’s Rights, remained silent too. So a new rule has emerged in France: the more politicians and institutions do not want to criticize Islamists norms, the more violent the debate on social networks.