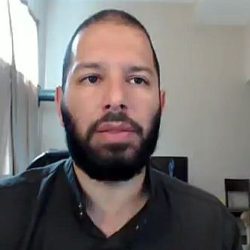 Mazin AbdulAdhim, a prominent Imam of Iraqi descent in London, Ontario who is affiliated with the radical Islamic global movement of Hizb ut-Tahrir, asserts that “Islam and democracy are contradictory and absolutely incompatible.”

AbdulAdhim’s statement comes in response to a video posted by Mehdi Hasan, a British political journalist, broadcaster and author, in who he argues that Muslims accept democratic values and argues Muslims not to listen to “experts” who claim otherwise.

The following is the transcript of Mehdi Hasan’s video (shortened version) that was broadcast on Al Jazeera TV:

“Muslims, Islam, democracy, elections – they just don’t go together. Do they? At least that’s what we’re told by some of the faiths biggest critics most

[Ayaan Hirsi Ali, Author, “Infidel”]: “Most Muslim countries are dictatorships. There is no democracy.”

“But look at the big picture. Sure the Arab world is home to plenty of kings, generals, dictators, but the majority of the world’s Muslim population doesn’t actually live in the Arab world.

“In fact, it’s the Asia Pacific region that’s home to 62 percent of all Muslims and of the top five countries in the world with the biggest Muslim population Indonesia, India, Pakistan, Bangladesh and Nigeria.

“Not only are none of them in the Middle East, but they’re all democracies too. Flawed democracies, yes, but democracies nevertheless, in which hundreds of millions of Muslims, regularly go to the polls to elect their rulers.

“And support for democracy goes beyond these 5 countries as the pollsters from Pew noted in the exhaustive study of 39 countries and 38,000 Muslims: “Most Muslims around the world expressed support for democracy.” And, yes, that includes those ordinary Arab Muslims, yes, the ones living under kings and generals. Remember 2011 when people across the region rose up in the Arab Spring.

“But, Arabs prefer a strong man in charge right? Wrong! Between 54 to 81 percent of Muslims from 5 Arab countries said they support having a democratic government over a leader with a strong hand.

“Just look at Tunisia which sparked the Arab Spring. Tunisians ousted a dictator, passed a relatively progressive constitution, elected a president from a secular party and chose a parliament comprised of both secularists and “Islamists”.

“Then there are the 50 million Muslims living in the West. Most of them seem perfectly happy to vote in and even stand in free and fair elections. The new directly-elected mayor of London, one of the world’s biggest greatest cities, is a Muslim

“In 2015 the U.K. increased its number of Muslim members in parliament from 8 to 13. Canada elected 11 Muslim MPs in the same year, and in the US, which has two Muslim congressman, Muslim voter registration is up ahead of the presidential election.

“So the next time some pseudo expert tells you Muslims don’t like democracy or Islam is incompatible with democracy, remember the hundreds of millions of Muslims, in fact the majority of the world’s Muslims, who prove that expert wrong.”

In response Mazin AbdulAdhim wrote among other things the following:

“This video does not discuss whether Islam is compatible with democracy, rather he is discussing whether Muslims can handle living under a democracy. These are two very separate issues.

“If we are going to discuss whether *Islam* is compatible with democracy, we need to define the two systems properly first.

“More specifically, we must defined:

“The issue is very simple:

“So, people tend to confuse these two things. Yes, people can elect their ruler in both Islam and democracy, but no, people cannot legislate their own laws in Islam, whereas they can in a democracy.

“Therefore, Islam and democracy are contradictory and absolutely incompatible, because Islam forbids mankind from legislating laws in the place of the Creator, even if the overwhelming majority of the people vote in favor of it…

“The Khilafah [Islamic State – Caliphate] system is the system of government designed by Allah (swt), and no amount misuse of it by bloodthirsty militias will change that fact. We should call for it, and work toward re-establishing it – and its return is a promise from Allah (swt) and His Messenger (saw).”