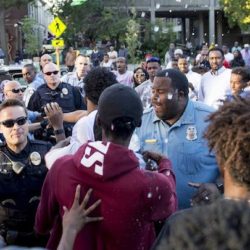 With yet another Hollywood tale about Somalis in the works, a young generation of activists in Minnesota asks: Why must it be about terrorism? And this time, they’re directing their anger at one of their own.

Rapper and singer K’naan faced a hostile reception from dozens of Somali-American protesters on Saturday at a block party in Minneapolis. He had just begun performing on a stage on Cedar Avenue, the beating pulse of the East African community, when demonstrators essentially shut him down.

The source of their hurt is K’naan’s latest project, an HBO series that several media reports have described as a drama about jihadi recruitment set in Minnesota, which also involves director Kathryn Bigelow.

Members of the crowd and protestors flee the event area after officers spray chemical irritant on Saturday. Easton Green | Minnesota Daily
“Him being a Somali, I would expect more of him,” said Filsan Ibrahim, 27, one of the organizers of the protest. “He has such a big platform. He could use his name and celebrity to change that narrative and say, ‘There’s more to us.'”

On Saturday, Ibrahim donned a purple scarf and grabbed a bullhorn to describe to the crowd what she anticipated from the cable TV show. “It’s going to be talking about how the Somali kids in Cedar are terrorists!” she cried.