Oh my, how the tables have turned!

A year ago, Gov. Mark Dayton of Minnesota attended a community forum in St. Cloud where the topic of Somalian refugees came up. He made national news when he denounced the “bigots” at the forum who questioned whether Somalis in St. Cloud had assimilated and had ties to terrorist groups. He mounted his high horse and scolded them that “if you can’t accept that, find another state.”

“ST. CLOUD – In the first of several tours to learn more about what the state can do to reduce racial disparities, Gov. Mark Dayton caught an earful.

At a community forum, residents of the St. Cloud region peppered him with questions — and suggestions — on what his administration can do to address racial disparities plaguing black Minnesotans. …”

In one instance, an attendee asked “leaders of Somali culture” whether immigrants had done enough to assimilate. Another accused a Somali man of working for an organization that he said had ties to terrorism groups, later urging those around him to “Google it” when the man denied the accusation.

Dayton denounced “bigots” and said those with racist attitudes do not belong in Minnesota. He said he would not tolerate racial discrimination, adding, “If you can’t accept that, find another state.”

A few months later, Gov. Mark Dayton and Sens. Al Franken and Amy Klobuchar took out a full-page ad in the Star Tribune denouncing those who opposed the refugee resettlement policy in St. Cloud as “un-Minnesotan”: 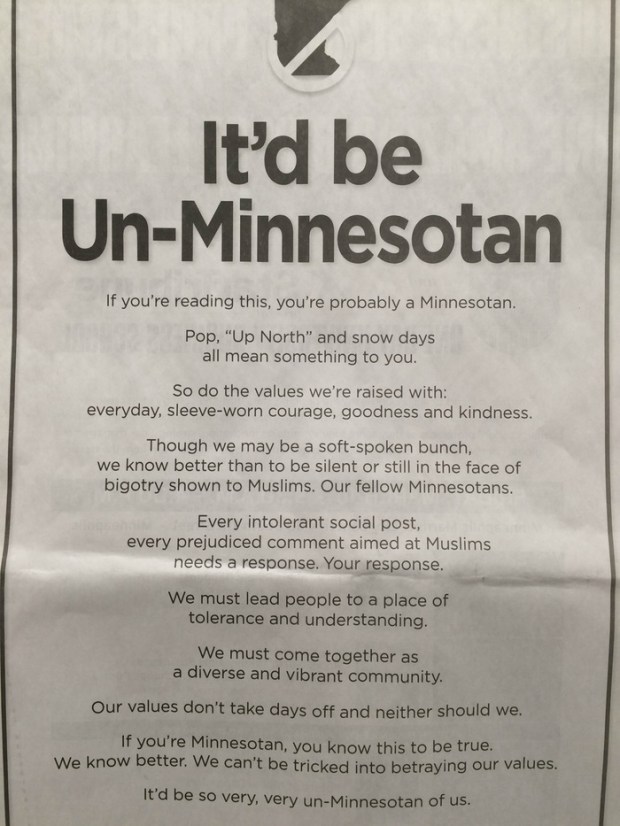 “Minnesota’s record of racial and religious tolerance is, for some, a point of local pride. But it’s been checkered, of late, with Minnesotans showing a cruel side in anti-refugee rhetoric again

st vulnerable Syrians or instances of racism against long-settled Somalis in St. Cloud.

In response, some of the most prominent liberals in the state are getting out the megaphone — and the wallet — in an effort to restate the state’s values.

A full-page ad in the front section of today’s Star Tribune appeals to our vanity, invoking Minnesota pride to inspire readers to fight back against bigots. We’re supposed to be a people of “everyday, sleeve-worn courage, good

They left out that we are also good-looking, healthy, and smart. Maybe they just ran out of room.

If you’re a Minnesotan, the ad says, you shouldn’t let your friends and acquaintances get away with racist or prejudicial thoughts about “fellow Minnesotans” who happen to be Muslim. The ad makes specific mention of not ignoring offensive social media posts. …”