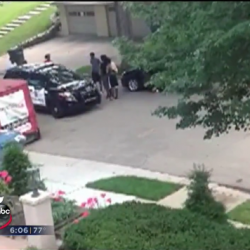 A mob of up to 30 young Somali men paraded through one of Minneapolis’ more upscale neighborhoods last week, yelling disparaging comments and threats against homeowners.

A female resident of the neighborhood, obviously shaken in a TV interview, related how she was screamed at by a Somali man who threatened to kidnap and rape her.

Somalis living in Minneapolis are almost all Sunni Muslims, and residents of the Lake Calhoun area say this isn’t the first time a group of Somali men has made an intimidating march through their neighborhood, which is filled with million-dollar homes.

No hate-crime charges are apparently being considered by either the Minnesota authorities or the Obama Justice Department headed by Loretta Lynch.

Police were called to the scene on June 28 about 9:30 a.m. and are investigating the incident as a potential case of terroristic threats. No arrests have been made, and the Minneapolis media appear to be largely uninterested in reporting on the mob threats.

According to a Minneapolis police report, between 20 and 30 young Somali men showed up in front of a woman’s house about 9:30 in the morning and started shouting insults. “The comments turned to threats,” the report said.

Watch local TV report of horrific threats made by a mob of young Somali men in Minneapolis:

Nearly all Somalis living in Minnesota are either refugees or children of refugees. They form a burgeoning Muslim enclave created by the U.S. government’s long-term refugee policy.