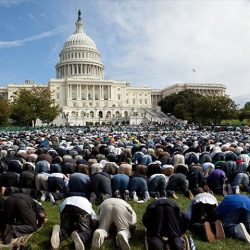 But polling data also reveal that an ominous, growing proportion of American Muslims wish to impose Sharia on America.

Yes, supporters of Sharia should be identified before they are admitted into the US.

The group answering “yes” was then asked:

Once identified, do you believe that individuals who support the practice of Sharia law should be admitted into the United States?

No, supporters of Sharia should not be admitted into the US.

The next query, which addressed only foreign visitors, elicited an even more emphatic demand for fidelity to bedrock First Amendment principles. It asked:

Do you believe that the United States government should require all foreign individuals entering the United States to affirm that they will uphold the principles of the constitution, such as freedom of religion and speech, above all personal ideologies for the duration of their stay in the country?

Yes, visitors to the US should be required to agree to uphold the constitution, regardless of their personal ideology, as a condition of their visit.

Sharia is utterly incompatible with the conceptions of human rights enshrined in the U.S. Bill of Rights.