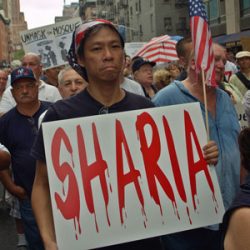 Traditional Muslims who understand the Quran and the hadith believe that sharia (Islamic law) expresses the highest and best goals for all societies. It is the will of Allah.

But is Islam just in its laws that Muhammad himself practiced and invented?

This article says no for ten verifiable reasons.

Here are four points you must read, before reading this article:

First, sometimes these ten points quote the Quran or omit it; sometimes they quote the hadith (reports of Muhammad’s words and actions outside of the Quran) or omit it. This is done only to keep down the length of the article. No one should be fooled into believing that these harsh and excessive laws were invented in the fevered imagination of extremists who came long after Muhammad. These harsh and excessive laws come directly from the founder of Islam in his Quran and in his example in the hadith.

Second, each of these ten reasons has a back—up article (or more) that is long and well documented with quotations and references to the Quran, the hadith, and classical legal opinions. The supporting articles also examine the historical and literary context of each Quranic verse. If the readers, especially critics, wish to challenge one or all of these ten reasons, or if they simply doubt them, they should click on the supporting articles. They will see that Muhammad himself actually laid down these excessive punishments and policies.

Third, it must be pointed out that these harsh laws are not (or should not be) imposed outside of an Islamic court of law. Careful legal hurdles must be passed before the punishments are carried out. However, even in that case, it will become clear to anyone who thinks clearly that these punishments and policies are excessive by their very nature, and excess is never just, as Aristotle taught us in his Nicomachean Ethics.

Fourth, in each of the lengthy supporting article (or articles), a Biblical view on these infractions of moral law (or sometimes civil law or personal injuries) is presented. One of the reasons we all sense that these Islamic punishments are harsh and excessive is that Christianity has also filled the globe. Even if one is not a Christian or is only a nominal Christian, he or she has breathed deeply of Christianity by virtue of laws and customs or even driving by churches. New Testament Christianity, when properly understood and followed, offers humanity dignity.

‘Islam’ in this article stands for Muhammad, the earliest Muslims, and classical legal scholars.

Here are the top ten reasons why sharia or Islamic law is bad for all societies.

10. Islam commands that drinkers and gamblers should be whipped.

In 2001, Iranian officials sentenced three men to flogging not only for illicit sex (see reason no. nine), but also for drinking alcohol.

In 2005, in Nigeria a sharia court ordered that a drinker should be caned eighty strokes.

In 2005, in the Indonesian province of Aceh, fifteen men were caned in front of a mosque for gambling. This was done publicly so all could see and fear. Eleven others are scheduled to undergo the same penalty for gambling.

After going through two previous confusing stages before coming down hard on drinkers and gamblers, the Quran finally prohibits alcohol and gambling in Sura 5:90—91; they do not prescribe the punishment of flogging, but the hadith does. A poor ‘criminal’ was brought to Muhammad who became angry:

The Prophet felt it hard (was angry) and ordered all those who were present in the house, to beat him [the drinker dragged into Muhammad’s presence]. (Bukhari, Punishments, nos. 6774—6775)

Thus, we see no offer of help for the alcoholic when he is dragged before Muhammad and his followers. Why does Muhammad not offer rehabilitation? Why does he immediately go to corporal punishment?

The later classical legal rulings follow the Quran and the hadith, so we do not need to examine them here.

Here is the article  that supports this tenth point and that analyzes the confusing Quranic verses on drinking and gambling. It analyzes the hadith and later legal rulings.

9. Islam allows husbands to hit their wives even if the husbands merely fear highhandedness in their wives.

In 2004, Rania al—Baz, who had been beaten by her husband, made her ordeal public to raise awareness about violence suffered by women in the home in Saudi Arabia.

Saudi television aired a talk show that discussed this issue. Scrolling three—fourths of the way down the link, the readers can see an Islamic scholar holding up sample rods that husbands may use to hit their wives.

4:34 . . . If you fear highhandedness from your wives, remind them [of the teaching of God], then ignore them when you go to bed, then hit them. If they obey you, you have no right to act against them. God is most high and great. (MAS Abdel Haleem, the Qur’an, Oxford UP, 2004)

The hadith says that Muslim women in the time of Muhammad were suffering from domestic violence in the context of confusing marriage laws:

Rifa’a divorced his wife whereupon ‘AbdurRahman bin Az—Zubair Al—Qurazi married her. ‘Aisha said that the lady (came), wearing a green veil (and complained to her (Aisha) of her husband and showed her a green spot on her skin caused by beating). It was the habit of ladies to support each other, so when Allah’s Apostle came, ‘Aisha said, “I have not seen any woman suffering as much as the believing women. Look! Her skin is greener than her clothes!” (Bukhari)

‘He [Muhammad] struck me [Aisha] on the chest which caused me pain.’

It is claimed that Islamic societies have fewer incidents of fornication and adultery because of strict laws or customs, for example, women wearing veils over their faces or keeping separate from men in social settings. But these results of fewer incidents of sexual ‘crimes’ may have unanticipated negative effects in other areas, such as the oppression of women. Generally, sharia restricts women’s social mobility and rights, the more closely sharia is followed. For example, in conservative Saudi Arabia women are not allowed to drive cars.  In Iran, the law oppresses women. For example, women’s testimony counts half that of men, and far more women than men are stoned to death for adultery.

Here is the supporting article for the ninth point. It has a long list of different translations of Sura 4:34, in order to resolve confusion over this verse, circulating around the web. This longer article has many links that demonstrate the oppression of women under Islamic law (scroll down to ‘Further discussion’).

In 2003, in Saudi Arabia a man had two teeth extracted under the law of retaliation.

In 2003, a court in Pakistan sentenced a man to be blinded by acid after he carried out a similar attack on his fianc�e.

In 2005, an Iranian court orders a man’s eye to be removed for throwing acid on another man and blinding him in both eyes.

5:45 And We ordained therein for them: Life for life, eye for eye, nose for nose, ear for ear, tooth for tooth and wounds equal for equal. But if anyone remits the retaliation by way of charity, it shall be for him an expiation. And whosoever does not judge by that which Allah has revealed, such are the Zalimun (polytheists and  wrongdoers . . .). (Hilali and Khan, The Noble Qur’an, Riyadh: Darussalam, 1996)

This passage allows for an indemnity or compensation instead of imposing the literal punishment of eye for an eye. No one should have a quarrel with this option. According to the hadith, the plaintiff also has the option to forgive, and this is legitimate, provided a judge oversees the process. The problem is the literal law of retaliation.

The hadith and later legal rulings demonstrate that this excessive option was actually carried out, as do the three modern examples linked above.

Please go here for the supporting article that cites the hadith and later legal rulings.

Islamic law calls all of humanity to march backwards 1,400 years BC and to re—impose the old law of retaliation—literally, and the evidence suggest that the Torah never intended the law to be carried out literally, as the supporting article demonstrates.

7. Islam commands that a male and female thief must have a hand cut off.

Warning! This short article has photos of severed hands. The reader should never lose sight of the fact that this punishment is prescribed in the Quran, the eternal word of Allah. It does not exist only in the fevered imagination of a violent and sick radical regime like the Taliban, which once ruled in Afghanistan.

5:38 Cut off the hands of thieves, whether they are male or female, as punishment for what they have done—a deterrent from God: God is almighty and wise. 39 But if anyone repents after his wrongdoing and makes amends, God will accept his repentance: God is most forgiving and merciful. (Haleem)

At first glance, verse 39 seems to accept repentance before the thief’s hand is cut off. But the hadith states emphatically that repentance is acceptable only after mutilation. Muhammad himself says that even if his own daughter, Fatima, were to steal and then intercede that her hand should not be cut off, he would still have to cut it off (Bukhari, Punishments, no. 6788)

If the reader would like to see more hadith passages, modern defenses of this indefensible punishment (and a refutation of them), and the Biblical solution to theft, they should click on this long supporting article or this shorter one.

6. Islam commands that highway robbers should be crucified or mutilated.

In September 2003, Scotsman Sandy Mitchell faced crucifixion in Saudi Arabia. He was beaten and tortured until he confessed to a crime he did not commit: a bomb plot masterminded by the British embassy. The article says of this punishment that it is the worst kind of execution and that two have been carried out in the last twenty years.

In 2002 Amnesty International reports that even though Saudi Arabia ratified the Convention against Torture and other Cruel, Inhuman or Degrading Treatment or Punishment (Convention against Torture) in October 1997, amputation is prescribed under both Hudud (punishments) and Qisas (law of retaliation). AI has recorded thirty—three amputations and nine cross—amputations where the alternate hand or foot is mutilated.

5:33 Those who wage war against God and His Messenger and strive to spread corruption in the land should be punished by death, crucifixion, the amputation of an alternate hand and foot or banishment from the land: a disgrace for them in this world, and then a terrible punishment in the Hereafter, 34 unless they repent before you overpower them: in that case bear in mind that God is forgiving and merciful. (Haleem)

It may be difficult to accept, but the hadith says that Muhammad tortured these next people before he executed them. This scenario provides the historical context of Sura 5:33—34. The explanations in parentheses have been added by the translator:

Narrated Anas: Some people . . . came to the Prophet and embraced Islam . . . [T]hey turned renegades (reverted from Islam) and killed the shepherd of the camels and took the camels away . . . The Prophet ordered that their hands and legs should be cut off and their eyes should be branded with heated pieces of iron, and that their cut hands and legs should not be cauterized, till they died. (Bukhari, Punishments, no. 6802)

See this short article for details on another example of Muhammad’s use of torture.

Islamic law says that these punishments are imposed for highway robbery, and in some cases crucifixion does not need a murder before it is imposed.

For more information on Muhammad’s brutality and the barbaric laws that flow out of it, go to the back—up article.

Read more at the American Thinker

Sharia Tribunal in Texas: This Is How It Starts
WATCH: Minnesota Leads The Nation in ISIS Recruits