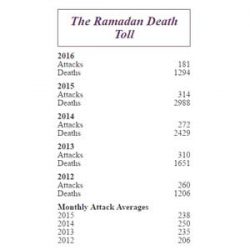 Officials in the Obama administration and liberal commentators who insist that the violence engulfing the world has nothing to do with Islam need only look at the death toll building around the Islamic holy month of Ramadan.

On Tuesday — the 23rd day of Ramadan — terrorists attacked Istanbul’s Ataturk Airport, killing 41 people. While no one has yet claimed responsibility for the attack, Turkish officials noted it bears the hallmarks of ISIS.

Islamic violence is a yearlong occurrence, but during the holy month of Ramadan that violence tends to reach epidemic levels. Indeed, some of the highest-profile and deadliest Islamic terror attacks have occurred during Ramadan.

Daniel Pipes, Islamic Terror Expert and President of the Middle East Forum, agreed the uptick in massacre is no coincidence.

“There appears to be a link between the upsurge in Islamist political violence and Ramadan,” Pipes said to LifeZette, “ISIS itself has made this connection.”

On June 26, 2015, Islamic militants gunned down 38 people at the tourist resort of Port El Kantaoui, Tunisia, in the deadliest attack in the country’s history. That same Ramadan, ISIS invaded the Kurdish village of Kobani, Iraq, slaughtering 103 of its residents, and Boko Haram militants massacred 97 people in Kukawa, Nigeria.

The average increase in Islamic violence during the holiday is so noticeable that thereligionofpeace.com — a “pluralistic, nonpartisan” website which bravely catalogues every single incident of Islamic violence reported in the media — makes a point to feature on its home page the staggering death toll that occurs during Ramadan each year.